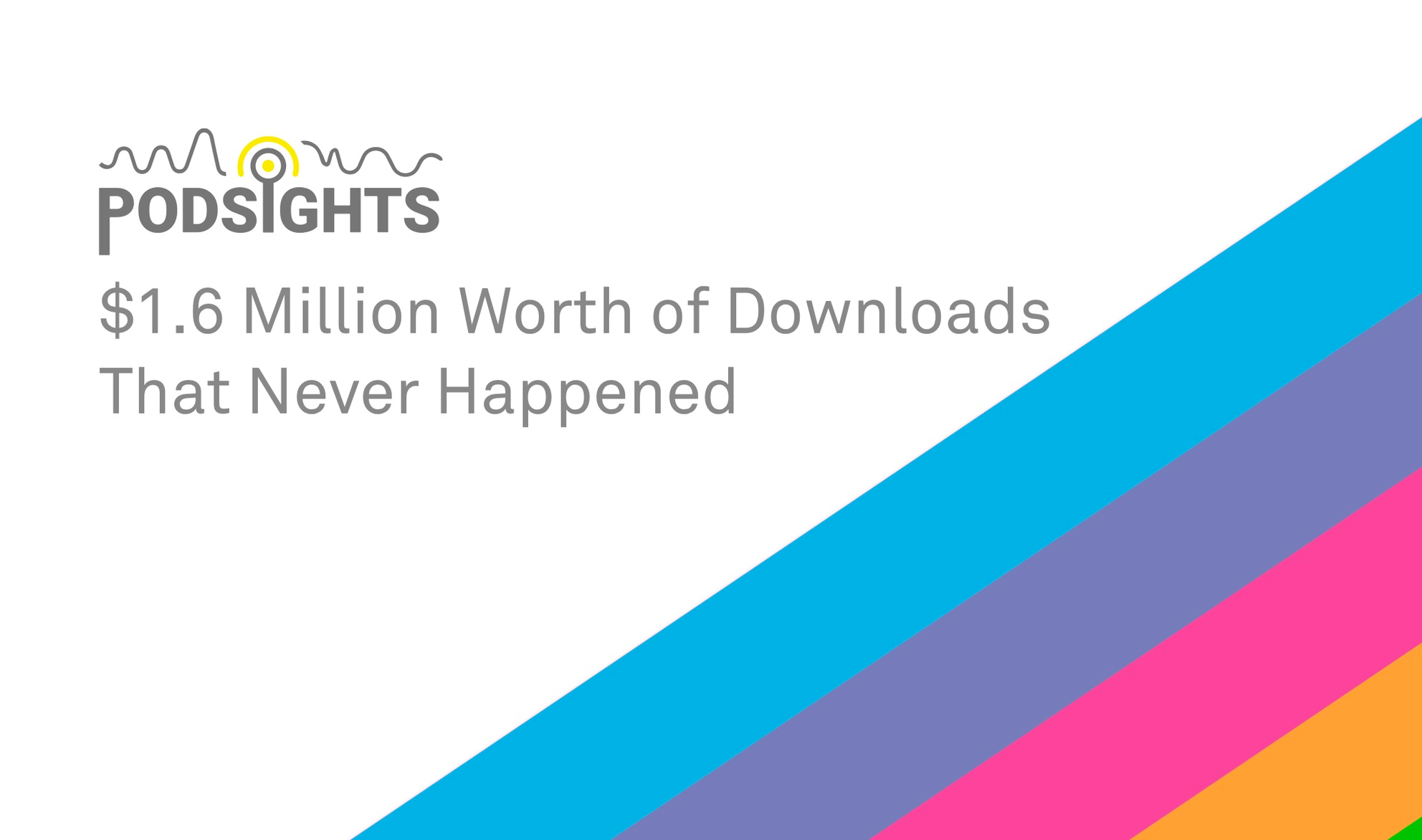 $1.6 Million Worth of Downloads That Never Happened

As Podtrac heads toward IABv2.0 certification, they are starting to revise their industry ranking numbers, finally taking the first steps to acknowledge that their download counts are inaccurate.

I want to be clear this isn’t a “different way of measuring,” which dulls the actual implications. Hosts and analytics providers, for years, have been counting downloads that never happened.

We set out to figure out who’s left holding the bag. (Hint: it’s brands like ZipRecruiter, Ring, and Robinhood)

Podtrac updated its algorithm in April as it heads to IAB v2.0 certification. You can see March compared to April below.

Two stand out: Barstool Sports and The Daily Wire whose numbers dropped 29.7% and 28% respectively. They also happen to be the only two without dynamic insertion or a standard hosting provider, meaning they use Podtrac’s numbers to verify downloads for advertisers.

Which got us thinking:

We know how much each publisher dropped.

We can approximate the total number of advertising dollars spent by each advertiser on downloads that never happened.

This is not a takedown of Barstool Sports and The Daily Wire; this is a takedown of the state of measurement in podcasting. What happens when an analytics provider misleads publishers and who pays the price?

We are going to focus this post on The Daily Wire because we have to make fewer assumptions. Barstool Sports is soon.

The Daily Wire only has five shows in the Podtrac rankings with The Ben Shapiro Show being largest. Due to the power laws of podcasting, it’s really safe to say Ben Shapiro’s show drives 70% to 80% of all downloads for the Daily Wire. His show is consistently in the top 50 of all podcasts where the rest barely crack the top 500. Our friends at Chartable have useful data here.

I’m going to take you through the math we used on this one because it makes assumptions. We also encourage you to play with the model so you can come to your own conclusions.

The Daily Wire had 30,508,000 downloads in February of 2019. If we assume that The Ben Shapiro Show is 75% of those numbers, we get 22,881,000 downloads. Not all of those downloads will be to current episodes. The Ben Shapiro show is on its 785th episode as of this week, so a decent amount of these downloads will be to the back catalog. We looked at our data from a few shows and found that approximately 70% of downloads are to current episodes. We only want to look at current downloads so that number falls to 16,016,700 downloads.

The Ben Shapiro show pushed 26 episodes in February, so on average, each episode got about 616,000 downloads. In these 26 shows, there were 31 pre-rolls and 45 mid-rolls. Daily large shows tend to be on the low side of CPMs, so we are estimating that a $20 CPM for a pre-roll and a $25 CPM for a mid-roll. On average then, The Ben Shapiro show makes ~$40k an episode in advertising dollars or approximately $1.07 million a month.

This number is in line with its peers at Barstool Sports who reported ~$15M in revenue in 2018 with similar downloads.

Advertisers bought $300k worth of downloads that didn’t happen in just one month. If we extend that over the data we have from Podtrac from October 2018 to March 2019 that number rises to $1.6 Million.

We are going to take this one step further. Podsights Research pulls ads out of popular podcasts, so we have all the placements in The Ben Shapiro show. You can view it here (https://research.podsights.com/podcasts/938cb24bca18444ca749b4bf3e7137be).

If we know approximately the number of downloads and industry CPMs, we can estimate what each advertiser paid for a spot. There are caveats here. We did not take into account bulk discounts or individual negotiations. We have no internal knowledge of how much someone paid for a spot, but we do have data to back up these estimates. Again, to make this painfully clear, we only used public data to make these estimates.

Policy Genius was one of the biggest advertisers on the Ben Shapiro show from October 2018 through March 2019. They bought 27 pre-rolls and 16 mid-rolls for a total of 43 placements. If we look at the downloads per episode during those months, we estimate that this campaign received ~25,996,000 impressions for a cost of ~$568,000.

Here’s the rest of the table:

We encourage you to play with this model and come to your own conclusions. It’s clear, however, who’s holding the bag.

Barstool Sports is a more complicated model, but we will look at those downloads in the coming weeks. If you want to get notified when we publish these posts, join Research (Now Advisor). It’s a free tool, and we send a weekly newsletter to those folks first.